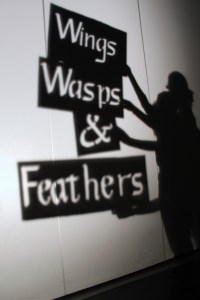 It has been a long and messy three weeks for the few in the company that have a particular talent for making shadow puppets, eventhough we all were having a go at times. We made 34 new puppets for the new show, many of which were made into the wee small hours in a very small cardboard cluttered kitchen, madly pinning stuff to the wall with a light bulb in tow. 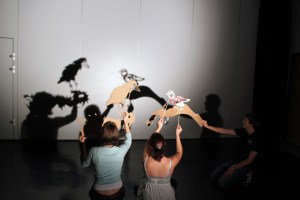 At these Politmore House events we get the chance to perform for family audiences, something that we didn’t always get the chance to do at University. We find ourselves particularly draw to the challange of engaging children using age old forms such as shadow puppetry.

With both shows at Poltimore, we were experimenting with the idea of never sheilding the puppets or the puppeteers from the audience;  in fact, the audience were sat amongst the puppeteers with no boundary line between us at all. We played with making shadows on the wall in front of us and the audience placed between us and the wall. This way, the audience are free to look at the performers and material puppets as well as the shadows there were making on the wall. Our bodies were always visible in the shadow and the process of shadow making was never hidden.

This experiment was fuelled by the idea that the process of shadow making could be just as engaging as the shadows themselves. A big question for us was this: if a magician shows you a magic trick but afterwards shows you how he did it, which do you find more interesting? Is the process of the trickery just as interesting as the trick itself?

The children in the audience seemed engaged by both the shadows and the puppets as they kept switching from one to the other. Something we had discussed throughout the process of our two shadow puppet shows at Poltimore was the idea of dual-performances. Originally, Tails of Exeter was performed behind a screen, hiding the puppeteers and the other mechanics of the show, and framing the puppets on a modest screen. Deviating from this more traditional way of performing shadow theatre has allowed us to create shows which work much more organically and interactively. 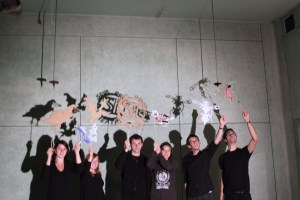 I’m still not sure what it is about shadow puppetry that grasping our attention at the moment. We are all going through a fascination with the stuff you can do with just some shapes and some light. Eventhough I’m sure our attentions will shift and develop to lots of other forms as we continue to workshop for our November show at the Bike Shed, it will be interesting to see how shadow making might bleed into Rogues and Wanderers. 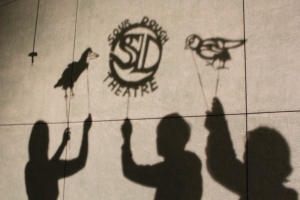