I haven’t blogged in a really long time. And suddenly on this sleepy Saturday afternoon I feel a great need to. So here goes,  this is what’s been happening  with SourDough Theatre in the last couple of months. 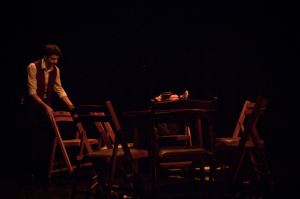 After the final performance of The Bloodline on Saturday 2nd April, SourDough Theatre hung up their sheep skin coats, wiped their faces clean from make-up, packed away their set, their complete works and moped the floor free from spaghetti. On Monday 4th April (My birthday!) at 6.30pm, we were back in the rehearsal room with a new show!

We felt very lucky to have an exciting new addition to the team; Dr Jerri Daboo as she invited us to work with her on staging Red Oleanders by Rabindrath Tagore to mark the celebration of Tagore’s 150th Birthday.

Jerri had been asked to stage something  for the Tagore Festival at Dartington, and for some reason she chose SourDough Theatre to be her actors in her chosen Tagore play Red Oleanders.

Red Oleanders  was a totally new challenge for SourDough. Jerri had chosen it because the story paralleled to some current world issues, which forced us to present some bold political statements with the piece. Some of us were more comfortable with this than others in the group and it stirred some passionate debate.

We, as a group, had not yet attempted to be particularly political with anything else we’ve made this year. I’m not sure why really, but there tends to be a reluntance or prickliness between us when a political observation or interpretation is suggested. Lack of bravery perhaps.

So, with Red Oleanders, we had to find our comfort with the statements we were making which was a great challenge and by the end I felt really refreshed by it and looked forwarded to seeing how it would be received by an audience.

I couldn’t wait to perform at Dartington Hall for a lot of reasons. A few weeks before, I’d attended part of Jerri’s Michael Chekov conference at University of Exeter. She presented a film about the Michael Chekov Years at Dartington Hall. The film was so recent in my mind, I couldn’t help let the history of the place capture my imagination as we were there setting up before our performance. I was looking forward to performing to some Tagore experts, if not a little intimidated. Tagore’s writing was something I hadn’t come across before our process with Jerri, so I was certain the audience knew a lot more about the brave decisions Jerri had made in adapting the piece and I was eager to see how it would be received.

We were the only performers of the festival to perform one of Tagore’s plays. So we were privileged to be described (by someone, it might not have been true) as the head-liner of the day. Bizarre!

The Great Hall is massive! We had great fun performing there, we had to work really hard to fill the room with sound and energy and for me it was quite funny how much our performances changed or rather grew in intensity. Our little company probably won’t get the opportunity to play in such a large room for a while, so we owe Jerri a huge thank you for giving us that gift.

We learnt a lot, as always, about our group dynamic during this process. The big challenge and the thing that is an ongoing learning curve for SourDough is the sheer mass of the group. We are a LARGE company of 9, and we are used to working very collaboratively and in each process experiment with different approaches to and levels of facilitation.  To work with an outside director was an important move for us and it was great that we had the chance to work with someone as experienced and trustworthy as Jerri. She was one of our lecturers at University and even though she didn’t teach all of us, she still was able to carry an authority from the student-teacher dynamic and managed to mediate discussion and debate in ways that hadn’t been possible within SourDough before.

On reflection, it was nice to hear responses from Jerri throughout the process along the lines of  ‘it’s nice to work with a fully formed ensemble, it makes my job easier because you are all so comfortable with each other’ and I think it was only in working with an outside director that I realised how in tune we have become as a company. 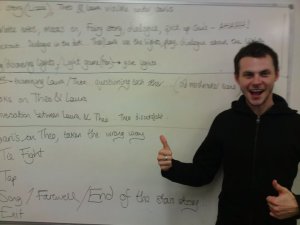 By experiencing what it is to have our trust in a director’s vision and being able to focus more our individual roles, I think we are now able to understand better the ways in which we work collaboratively. With Rogues and Wanderers and The Bloodline, there came a point in the process in which we felt the need to map the ‘peaks and troughs’ of the  dramaturgy of the piece. This would be a group exercise where we would spend as long as it took to reach an agreement of where the journey of the piece should lie, where the light and dark needed to be placed and at which points in the piece the energy needed to shift. We would do this because it would be important for us to have a collective understanding and agreement of the dramaturgy. In Red Oleanders, because of our trust in Jerri’s vision, this collective understanding and agreement wasn’t always necessary and we could see the work Jerri was doing to make those decisions herself as the director.

For us, this discovery highlights the importance of exercises like that (that being merely an example) when you’re are working collaboratively without a director, and perhaps teaches us to have greater trust in the importance of these exercises. I really feel more and more that we are discovering our own practice as a company, which is a nice feeling. It gives us a foundation to keep growing and developing from.

Next is a piece called Home Towns, that we are developing for the two Devon fringe festivals, Barnstaple’s Fringe TheatreFest and Exeter Fringe Festival. It is a piece that will explore each other’s histories and memories of our Home Towns. Again we are treading new ground here in search of ways to make something that has a strong relevance to us as a group and perhaps even a stronger access point for our audiences . . . who knows.

2011 is already shaping up to be a very exciting year for SourDough Theatre. We are currently deep into rehearsals for our upcoming show, The Bloodline, which is an adaptation of King Lear and, indeed, many things Shakespeare. Our emphasis with this show will be on the visual as we use The Bard’s text as another media (such as shadows or music). The framework we have been researching since 2010’s mince-pie fuelled fundraiser, A Christmas Carol, is that of underground organisations and the crime world. We are fairly confident that we can somehow find a place for Will’s words in this world. The Bloodline will be performed at The Bike Shed Theatre on 31st March – 2nd April. 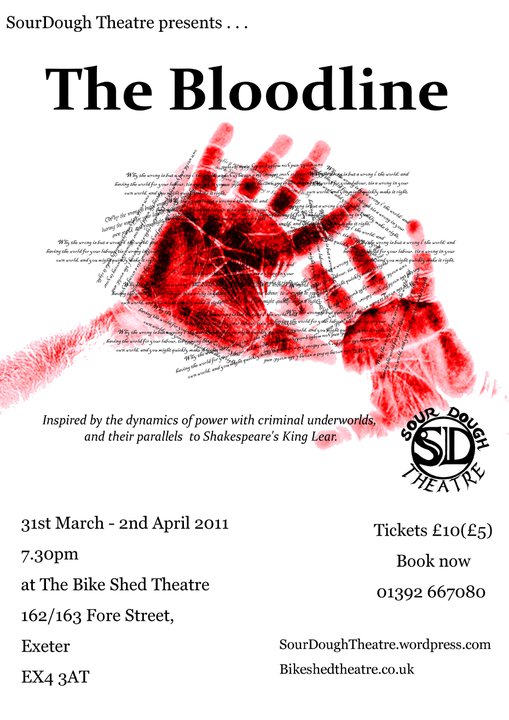 We have exciting news to do with the In The Flesh festival at The Barbican in Plymouth, where we will be showcasing a sneak-peek extract from The Bloodline. We will also be performing at the Tagore Festival at Dartington where we have teamed up with Jerri Daboo to create a new version of The Red Oleanders which we will taking to the festival (and possibly beyond?). We have put our names forward for a few other festivals and, if these applications pay off, 2011 will shape up to be a very interesting one.

With each New Year come (it seems) new opportunities and we have been talking long and hard about where to take the company as we finish off our first year of existence (and indeed what kind of theatre company we are). In light of this we are looking to take one of our shows (tbc-watch this space!) on a South West Summer Tour.