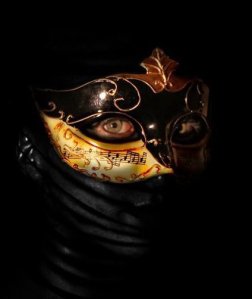 First performed in November 2010 at the Bike Shed Theatre, Exeter

Our first major piece, a devised exploration of a world where beings played their same ritualistic games day after day. With only the loosest plot as a framing device it was a highly theatrical and playful sensory experience going from one game to the next – from dancing with torches in hand while shadows played upon the ceiling, to creating stories and origami roses to duelling with ties to a rhythmic beat, all done with an explorative slowness as one theatrical device was delighted with before moving onto the next.

It was quite beautiful to watch with saris draped over the stage, and the performers wearing eclectic costumes and intricately-decorated masks; the entire performance accompanied by two live musicians-come-storytellers, Lizzie Westcott and Jack Davy, musically interacting with the actors to a loose, improv-allowing, devised score. Rogues and Wanderers was calming and restive, and several audience members coming from hard days of work or long journeys, described it as being just what they needed. That being said it was very simple and lacked a great deal of depth,partially because of its 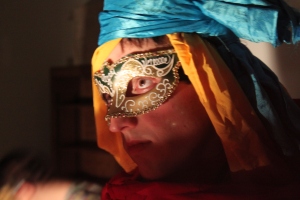 Taking very loose inspiration from Aphra Benn’s The Rover we originally set about with writing and improvisation workshops about a new world and began to settle upon a very elaborate plotline (based around the common structure used in all films in which a character journeys from one world to another, whether that be The Wizard of Oz, or The Beach) about two siblings journeying to a joyful but oppressive world. However we eventually realised it was becoming overburdened in text and ‘rules of the world’ and we instead decided to take a new direction. Experimenting with extended improvisations, devices and our two musicians we instead began to move down the far more ‘devised’ route with no discernable plotline but with more focus on a more theatrical experience.

Eventually we narrowed down a great deal of material into a rhythmic structure and from that came a light plotline which served as our framing device and an anchor for the audience and the piece was, not without difficulties, finally born