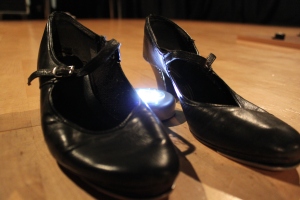 On Sunday 31st October 2010, SourDough Theatre began a rehearsal in St Stephens Church in Exeter. Theatre makers or not, most people our age would usually spend Halloween in a number of places, be it pub, club or party. But for SourDough, All-Hallows-Eve  was the night before a mammoth get-in, technical rehearsal and, as is often the case with devised work, last-minute show-making! And as such it saw us move from one beloved rehearsal space into another:  St Stephen’s Church, to allow us to carry on into the night.

Whilst rehearsing for Rogues and Wanderers, we would use the church most Sunday evenings as our usually hang outs would be locked up. A couple of us in the company have used the church as a performance space for a previous project at University. We love the space, it is vast, cold and echoy and has a wonderful quite, ancient atmosphere even though it is located at the very centre of busy Exeter. 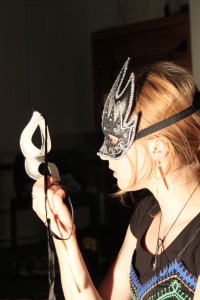 So, we were 2 days away from our opening night and we sat around a long grand table to discuss the piece as a whole in order to develop a plan of action for our all important last days of preparation. This discussion actually began to function as a way of sharing each of our thoughts about what the piece had become and how it had emerged. This was the point at which we began to feel tingles of excitement about showing it to an audience and a real connection with the piece had sprung into life in each of us and left us feeling really proud of it.

We decided to get up and use the massive space to run through the piece and apply some of the touch ups and improvements we had been talking about. Whether it was the hushed atmosphere of the church, or the air of halloween night, or the levels of excitement that was mounting in us, this run-through turned out to be full of energy and when it came to try our ending for the very first time, it was a very special moment indeed.

We had been preparing a song for the final section of the performance for a couple of weeks, and as singing in harmony had not came naturally to us as a group, it was something we had been working hard for and had been really enjoying. When we applied it to the piece in that rehearsal, it was the first time we had tried it without the much needed guidance of our wonderful, god-sent musicians. However the sound of our united voices in that vast, silent church was enough to move us into a humble contentment with the piece we had finally finished. 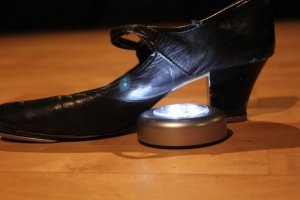 As we quietly packed away our belongings and left through the Church’s back door, the song still softly resonating  through our heads, there was a strange buzz that twisted through us all. It was born of the excitement that comes when the nights come swifter and the air turns colder; as the dwindling October hours and their Halloween masks stand on the cusp of bonfires, fireworks and Christmas trees. And sometimes, on wonderfully rare occasions, this autumnal electricity works its way through an unusual moment, like the one the eight of us shared in the old church. Never had any of us spent a Halloween quite like that one. 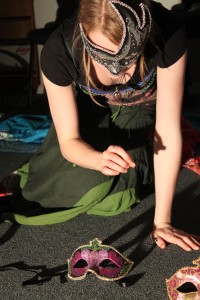 One response to “A SourDough Halloween”