While studying at university one of the common phrases thrown around during any devising process was that people shouldn’t be afraid of “killing babies”. Obviously this wasn’t meant literally, it of course meant that when creating work ideas should be treated as just that; ideas. An idea can change and shift, grow or shrink, or gotten rid of altogether. Every idea that is created through exercises or discussions should not be considered set in stone but in fact seen as something malleable. This is where we got the name “SourDough”.

Dough can be moulded, expanded, baked, shaped, stretched, added too and taken away from. Consider an idea as a piece of dough while making bread. Sometimes the dough is too big to fit in the tin before going in the oven and bits needed to be taken away but those bits would never go in the bin, but saved until the next loaf of bread needs to be made.

So here we have two different approaches to devising, killing your babies and making dough. For a while I simply stopped talking about babies and completely focused on my dough and every idea that was aired was treated as such, however over the course of Rogues and Wanderers the difference between the two has become totally clear to me, and has brought babies back on my mind.

Sometimes it is necessary to let ideas go completely. And these ideas are difficult to use in a future piece, a future loaf. A rule of a particular world for example which would not fit in any other project. However, a theatrical devise (like a box of matches, that can be used in so many different ways to achieve so many different affects) which can be moulded to fit another piece is dough, and if it does not fit in the piece that you are doing at that particular moment it should be wrapped up in cling film and put in the fridge. It is sometimes difficult to see the difference between the two and most of the time it is only in hindsight that the dough can be taken from the babies, but realising what can be saved is important. Killing a baby is sometimes hard work and people can find it difficult to let go of precious ideas, but if you look at it as dough that can be used again the disappointment is greatly reduced.

ough was introduced to us during a module in our second year by our tutor, we greeted it with giggles. However as time goes on, and we get more and more experienced with devising work the phrase has stuck with us and has now become an integral part of our language during our process. 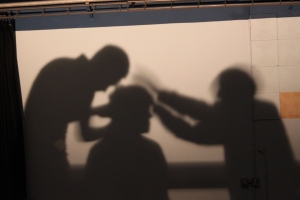